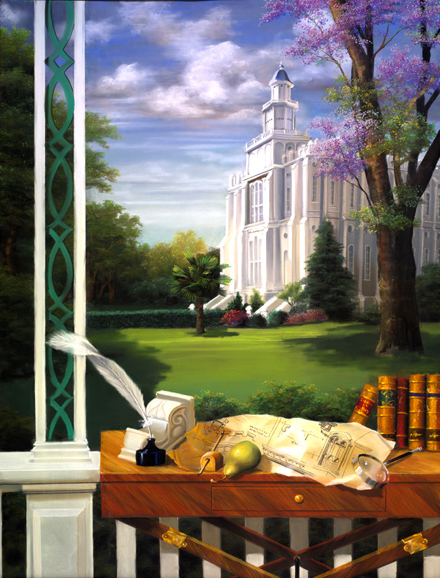 In this spectacular pastel by James Jensen, the first temple completed upon the early pioneers’ settlement in the West is viewed from behind the desk of an architect reviewing the final plans for its completion. Guided by the prophetic instruction given by Brigham Young, construction of the St. George Temple not only provided worthy Church members a place to receive temple ordinances, but also taught them through miraculous means that the Lord always provides a way for his commandments to be achieved.

These pioneers nearly abandoned building the St. George Temple in its designated location upon finding that the site was highly unstable swamp land. After proceeding in faith, however, the builders constructed special drains and packed the foundation with volcanic rock and lead using an old cannon as a pile driver. The foundation proved solid and the temple was completed, offering the pioneers a place in which they might receive the saving ordinances of the temple. Thus, the St. George Temple holds a special place in Church history, not only because of its remarkable beginnings, but also standing as the first operating temple in the West.

In this print, James Jensen has captured the beauty of the temple on a glorious summer day. The inviting image portrays the serenity of the St. George Temple, allowing the viewer a glimpse of the peacefulness emanating from its sacred ground.

James Jensen's extraordinary talent in the pastel medium has been recognized by fellow artists and art lovers alike. His works embody a rich, archival quality which sets him apart as one of the most distinguished artists of our time, as well as the recipient of the top awards in his field. Trained in Boulder, Colorado, New York City, and Milan, his work is a fusion of modern perspective and old world technique that results in breathtaking still lifes and architectural renderings.