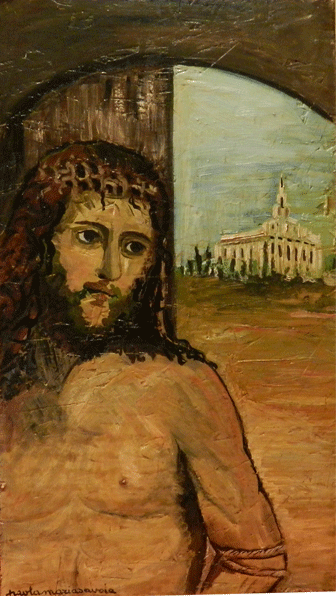 Original Oil on Board

Original Oil on Board
Gallery Price: 3000
Size: 14X24
Contact us for pricing

The title, "Exspecto Passio" is Latin for "I wait for the Passion."

This original piece, the first from artist Paola Savoia painted exclusively for the Sacred Print, portrays Jesus in the moments before His holy passion. With calm composure, the Lord fixes his eyes on the temple behind Him.

The painting is divided in two parts. On the dark side, Christ is secluded and awaiting his sacrifice. On the light side, the Temple appears bright, carrying a real and living promise of the eternal salvation of mankind. The figure of Christ is painted so that we see the duality of His humanity and divine nature.  Special care was taken in the composition of Christ’s eyes. His gaze over the temple is in similitude of his watchful care over the entire human world.

The style is inspired from primeval Christian art crafts. The essential figures painted in Earth tones. Golden colors prevail triumphant over the others to give a sense of majesty and glory.

Paola Maria Savoia was born in Genoa (Italy) in 1960 and directly descends from the illegitimate branch of the noble and ancient Savoia family, which used to be the former Royal Family of Italy (until 1946). Since the age of nine she clearly showed her love for the arts and started to paint and attract the attention of some important critics. She held her first art exhibition at the age of 10. She attended the Institute of fine Arts in Genoa, letting her artistic passion grow and lead her through a path made of prizes and achievements she consistently received (Premio Città di Mare, Camera di Commercio, Manifestazione Prà-Lido, Premio Città di Pegli).