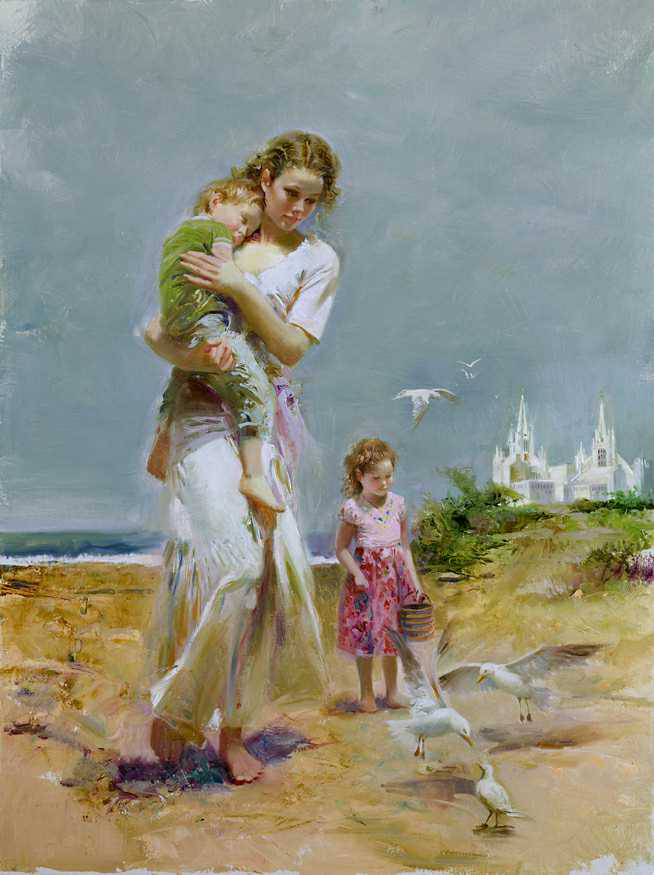 The opportunity to own an original Pino oil painting is rare.
Buy this one of a kind masterpiece through the Sacred Print now!
Type: Framed on canvas
Print Size: 30X40
Framed Size: 38X48
Call for pricing

The demand for Pino's free yet vividly poignant creations has historically been overwhelming, and his newest painting, Heavenly Breeze, is sure to remain true to form. As with each of his works, this one contains an unexpected element, although the central idea remains consistent with his theme of faith and family, and particularly the pricelessness of motherhood. In this case, the surprise lies in the fact that the figures are set in direct relation to the viewer-- perhaps intended to be a family member or close friend--effectively drawing one into the scene. Here, a mother and her two young children are seen idling on a windy beach, while the resplendent San Diego Temple shines in the background, solidly planted and unmoved by the storms of life.

Another striking aspect of this painting is the artist's use of "negative space," that is, those portions of the canvas which are minimally covered or which remain bare, thereby directing the viewer's eye according to the artist's desires and creating a sense of a frame within a frame. In other words, the final image is not the masked-off portioned of a perceived larger view, but a complete view in its own right. This technique creates an intimacy in Pino's work which is universally appealing.

Added to the fact that his figures seem so personal (in fact, many are modeled after his own family), it is no wonder that this latest addition will certainly become a favorite among his collectors.

Giuseppe D'Angelico--now better known as Pino Daeni, or simply Pino --was born in Bari, Italy in 1939. His father was a technician at a local university, and although the family suffered hardships due to the war-torn country's economic distress at the time, Pino found a refuge in art. "It is fine art, unlike other artistic milieu, that the brush strokes come from the heart rather than the eye," says Pino of his true calling.